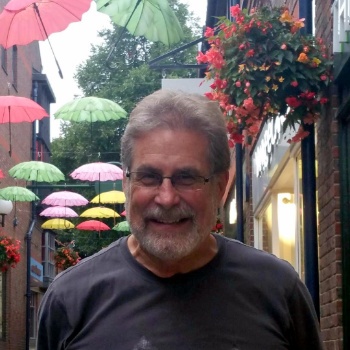 David showed an interest in art at an early age - drawing cartoons, painting and creating story books at the age of 7. This interest continued into his teenage years. He participated in several art guilds and workshops and at age 14 a contemporary still life oil painting of his was purchased by the Museum of Modern Art in Washington DC.

David's passion for painting was renewed when he attended a local workshop in gouache painting. Although familiar with oil painting, gouache has now become his medium of choice due to its vibrancy of colors. His work, best described as Geo-Contemporary because of its strong geometric design elements, includes landscapes, countryscapes, still life and figurative subjects. He is strongly influenced by Post-Impressionist artists, particulaly Van Gogh, Gauguin and Toulouse Lautrec.

David has received several awards including:

David and his wife Mariuxi currently reside in Lake Oconee, Georgia. They own and operate Dress the Walls (a custom framing shop) and Art of Oconee Gallery.